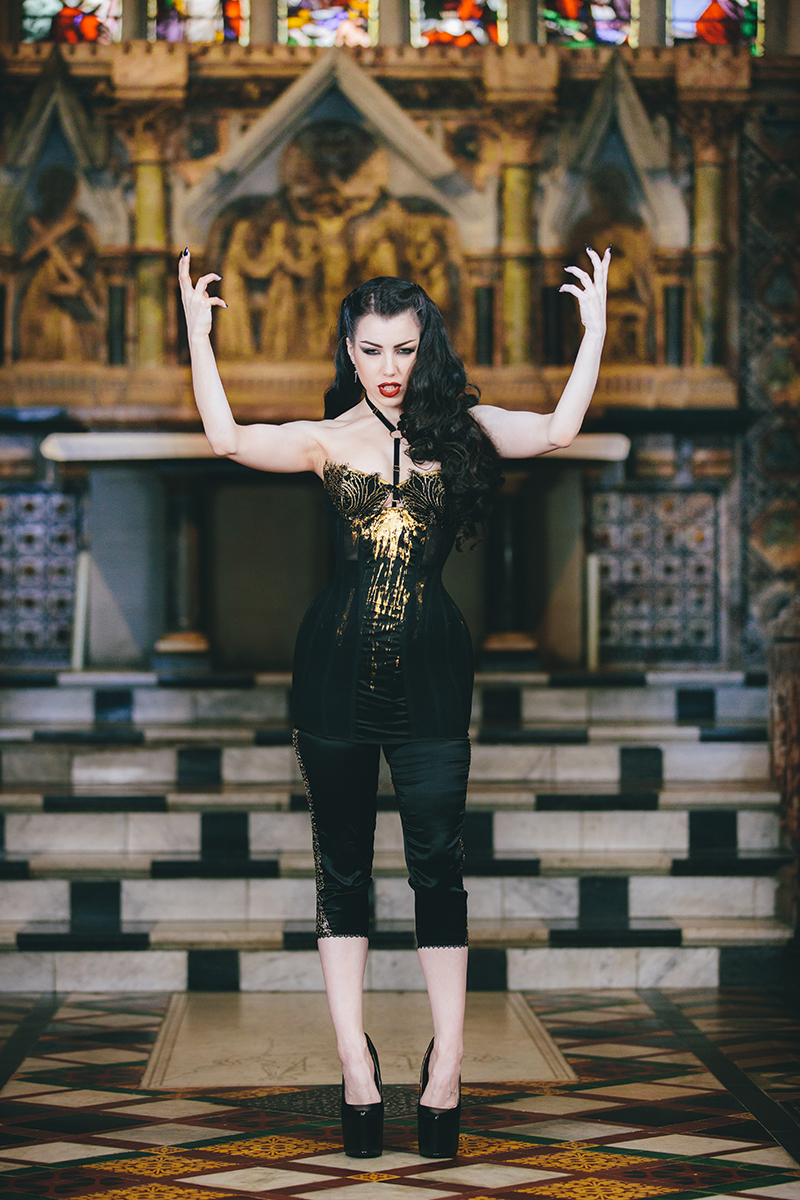 This corset was created as my showpiece for the Oxford Conference of Corsetry. One of the curses of creativity is the constant dissatisfaction with what you make (or at least, in my case!). Of the 7 or so corsets that I created in the run up to the event, this was the last one that I started. It was also the only one I had a concrete design idea for and the only one that turned out exactly how I’d imagined.

This dress was a development on a cupped bobbinet corset dress that I also had photographed at the conference; a similar base, but totally different approaches to embellishment.  Both pieces started with a cotton bobbinet base: a lightweight tulle net that is created in a similar manner to lace. In a double layer, it is strong enough to sculpt the body. There’s a small amount of give to this fabric: not enough to ‘stretch’ as such, but enough to mold beautifully around curves.

The centre front and back panels are created in an outer layer of silk duchess and lining of cotton coutil. The centre front has concealed boning and has a bound top edge leading to a keyhole cutout beneath the cups with a velvet loop for a detachable harness.

Cups are made of a foam lining for a smooth and sculpted shape and an outer of silk duchess and exquisite French leavers lace, fastening together with a hook and eye. This lace is one of the most striking designs that I’ve come across in recent years: I’ve been struggling to find a use for it for nearly a year. Putting it into lingerie seemed almost a waste: any lingerie that I create for the purpose of sale has to have a certain amount of limitations in an attempt to keep the price at somewhere vaguely commercial. The cost of this particular lace style means that using a scallop on the designs of cups for example would push the retail price beyond £250 for a bra.  Whilst this would make for a lovely showpiece, I wouldn’t want to invest so much time in the design, pattern cutting and grading of a piece knowing that I wouldn’t be guaranteed to sell it in a certain amount of volume.

One of the elements of my recent cupped corsets that I’m particularly proud of is that the fit of the cups. Cupped corsets as a rule encounter feature a certain amount of fit issues. Metal bra wires as a rule rely on the stretch and tension found in a bra to ‘spring’ open and fit around the body, something that isn’t generally found within rigid corsetry.  This is something that I’ve managed to work around by building in something akin to a bra wing, in my signature adjustable style.

The embellishment was where I had the most fun – and I suspect that shows! I’d had some somewhat limited experience working with gold leaf many years ago, as part of my AS-level Fine Art coursework. At the time, I’d had somewhat of an obsession with Catholic icons and their sheer opulence.  I’ve never been a particularly accurate painter so I never intended to try and approach this corset with any sense of precision. It was to be a total opposite attitude to delicate lace appliqué and beading.  This is one of the reasons that I created this corset with a closed front: as a larger canvas for painting, rather than splitting it into panels with a busk. Of course, this caused a few problems later on: dressing a closed front corset dress with closely-spaced eyelets isn’t exactly a walk in the park suffice to say…

It shouldn’t come as a surprise then that the gilding process was a lot of fun. The floor and mannequin were covered in a lovely selection of plastic bin bags whilst I began painting and dripping size around the corset with a certain amount of enthusiasm.  As it began to get tacky, I’d apply the gold leaf: admittedly, with a sense of trepidation. I’d been a little irresponsible and had bough a small book of 24ct gold leaf, rather than going for a couple of books’ worth of a less pure gold. Fortunately, there was just enough gold to achieve what I’d been hoping. Faded, golden drips, splashing down from the top edges of the corset.

Admittedly, this piece was pattern cut to fit my body specifically; I tend to use my figure as my ‘sample’ size. It is admittedly the wrong size for Morgana.  The cups are a size too small and the rest of the garment a couple of inches too big. Nevertheless, it did the job for some gorgeous photos. I’d still like to have this shot without the high-waisted leggings underneath (a requirement of modesty around the Jesus college campus!): you can’t quite get the full impression of the delightful sheerness of the bobbinet.

Out of all the pieces that I made this Summer, this was the only one that I felt satisfied with from the moment it was finished (which is rather an odd experience for me!).  This gilding technique is definitely something that I’d like to revisit – perhaps not commercially viable for lingerie but it certainly has a striking effect.

What do you think of this gilding embellishment? Do you love this French lace as much as I do?

I've deliberately been avoiding posting much recently to avoid making unnecessary noise when there so many other relevant voices that need social media right now. I'm filled with horror at what is happening in the US right now, and I want to help the black community. I've donated what I can from personal funds. Pledging a portion of sales is currently pointless (there are no sales), so I'm trying something else instead. I'm running a donation drive for charities/organisations that support black communities, protestors & police reform. I am giving away a cape and choker set worth ~$300 to one random donor who sends me a receipt for a donation of $10+. Full details and T&Cs on my blog, link in profile. Image from @blklivesmatter - direct link to donate in the blogpost
Time is running out - just two days left to get 20% off @underpinningsmuseum merch (everything in the Etsy store with code IG20K), or be in with a chance to win a pack of ALL our garment patterns and exhibition catalogues. Head over to the @underpinningsmuseum page and see the latest post for all the details! 📷 @tigzrice of my Cassiopeia set for The Underpinnings Museum.
Just finished up this Black Metal inspired corset in hand painted white silk, shredded silk tulle, French lace appliqué and jet glass spike beading. See the full garment in detail over on Patreon 🖤
Mannequin shots always do better on social media, but it is so difficult to accurately portray the shape of corsetry on solid mannequins, even with extensive padding. A material like bobbinet only really comes to life on an actual body; corsetry is designed to shape actual flesh, and a solid dress form is rarely the right silhouette to start with. I'm curious... do you prefer to see my work displayed on a mannequin, or a human? And why? ❤ 'Violente' cupped bobbinet corset and ouvert silk tulle tutu knickers from 2017. Hand stitched lace appliqué with Swarovski crystals.
Cupped corset from the Un|Seelie collection in 2017. Bobbinet tulle, Italian printed jacquard silk, hand stitched French lace appliqué and a small flourish of flossing embroidery. I couldn't resist adding some capped sleeves to this piece! It's a fairly extreme silhouette with a 18.5" closed waist and dramatic hip spring, with the bottom line inspired by the iconic 1950s Warner's Merry Widow 🖤 Last couple of months have been heavy on the corsetry and not much lingerie, which I have rather enjoyed! It's a very different pace and style of working. Hope to get back to my studio soon though, the knickers have waited long enough 😁
Just a small snippet of one of my favourite commissions this year: pattern matched chantilly lace tap pants and vintage leavers lace garters, trimmed with silk ribbonwork, ostrich plumes and freshwater pearls 💕 This was part of a full 1920s inspired ensemble that also included a bralet, briefs and a boudoir cap. It was a joy to focus on all of the tiny elaborate details and embellishments, and you can see the full commission in detail over on my Patreon.
%d bloggers like this: